At Copenhagen Guitar Show 2013 we came across a very beautiful, rare and highly sought after 1960 Gibson Les Paul Standard Burst, Serial #02170. At the time it was for sale through swedish vintage guitar dealer Anderson Anderson. Anders has been collecting Bursts since the 70´s and is known as one of the premier vintage guitar dealers in Scandinavia for highend and collectible vintage guitars.
The 1958 – 1960 Gibson Les Paul Standards are the most collectible guitars within electric solidbody category.

Hope you will enjoy the pics and the video we did with Anders on this guitar from the show as well. The video starts with Anders showing us the 1960 Burst 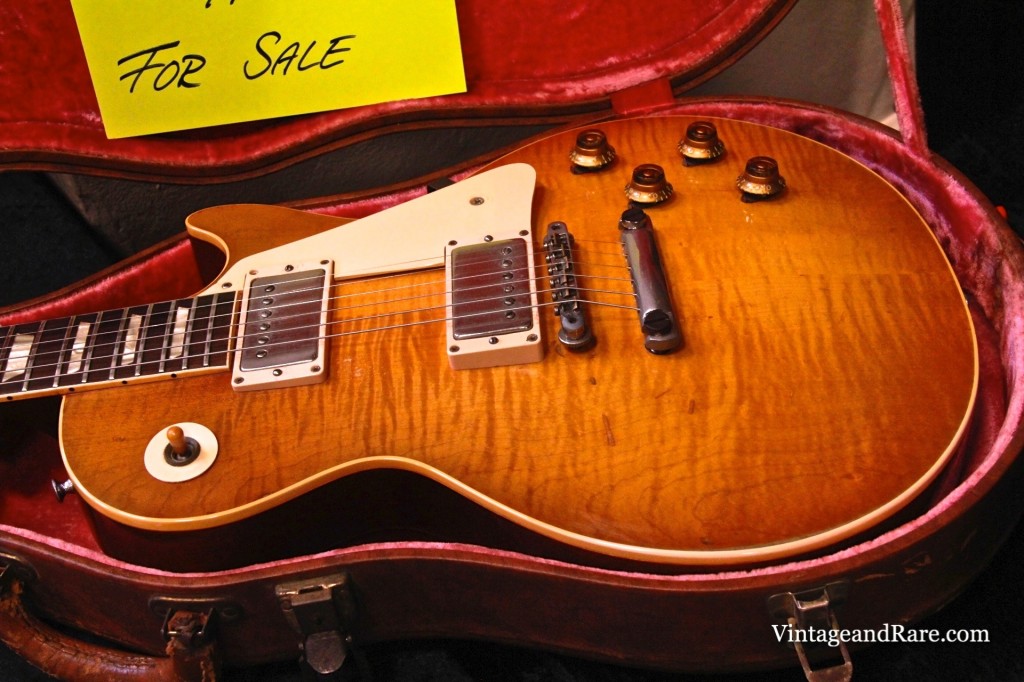 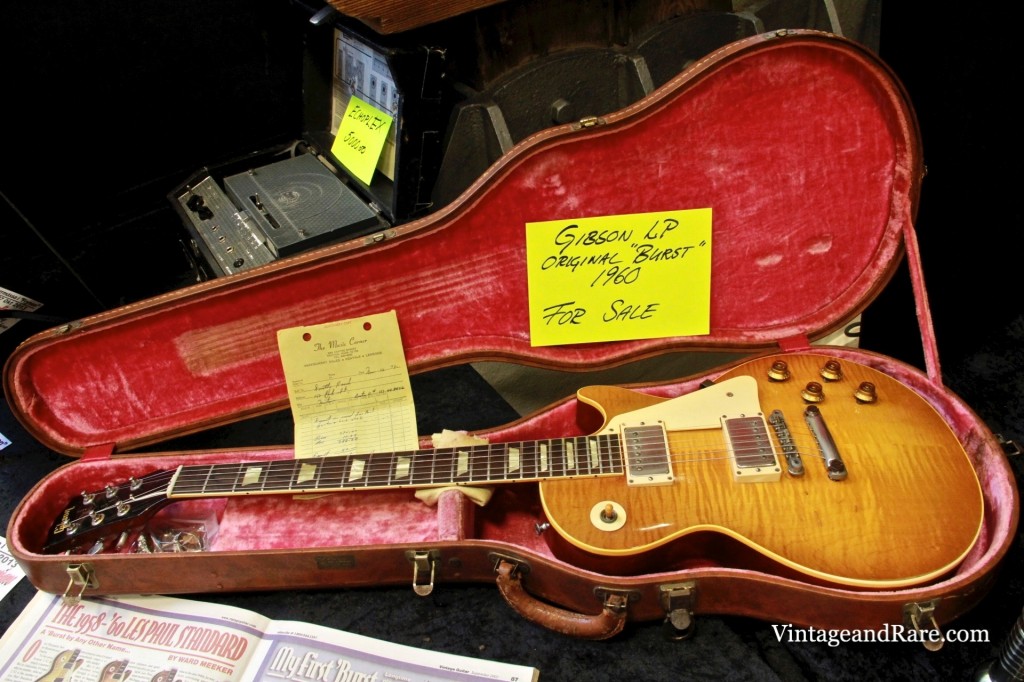 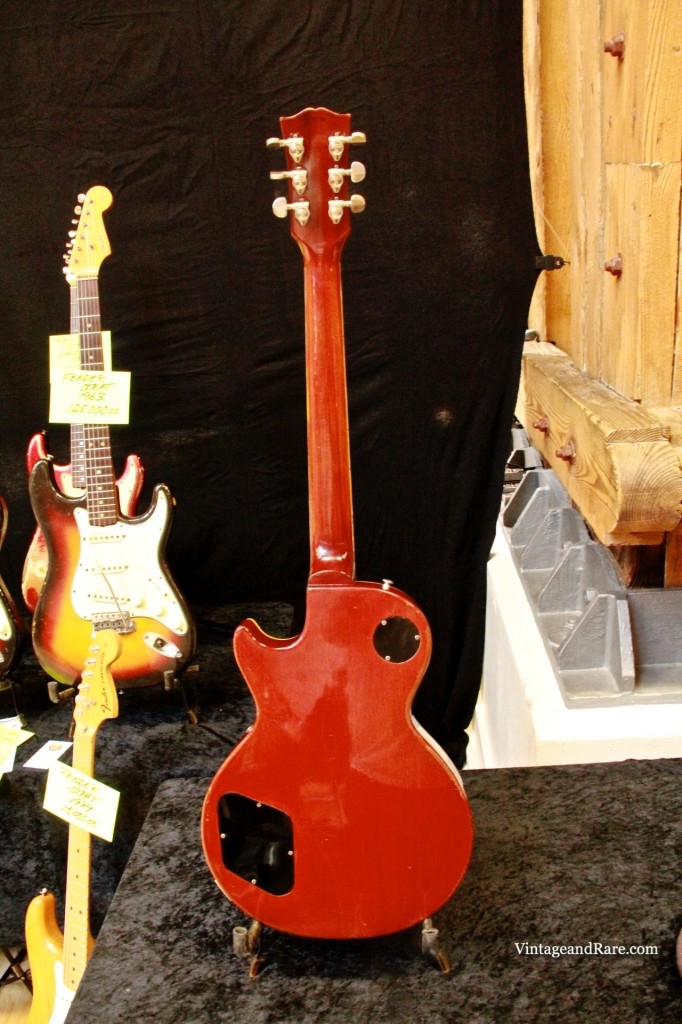 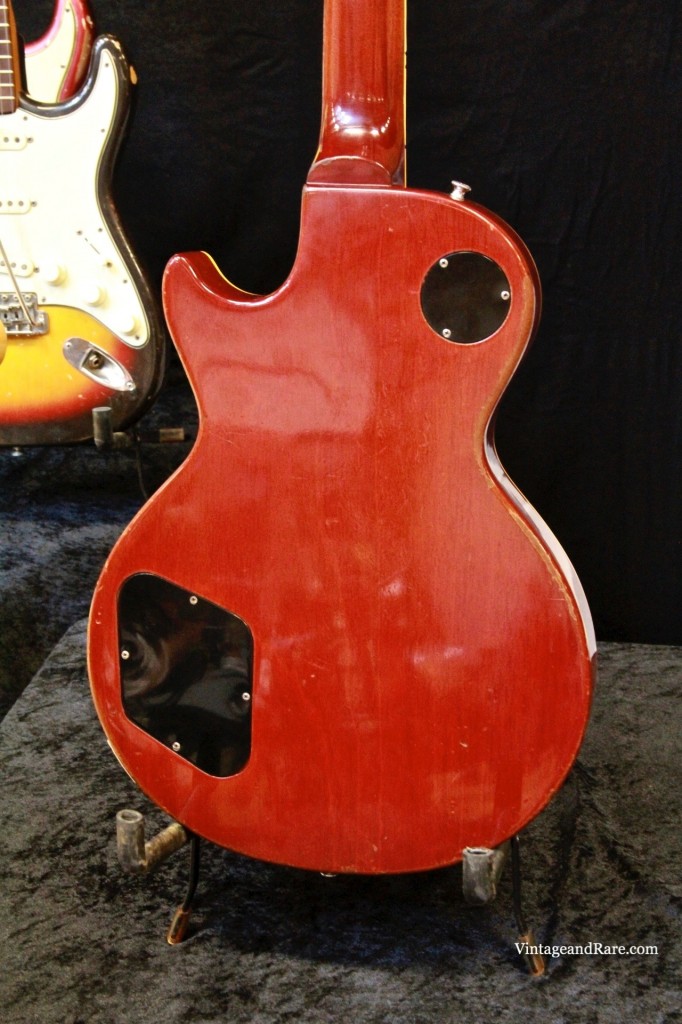 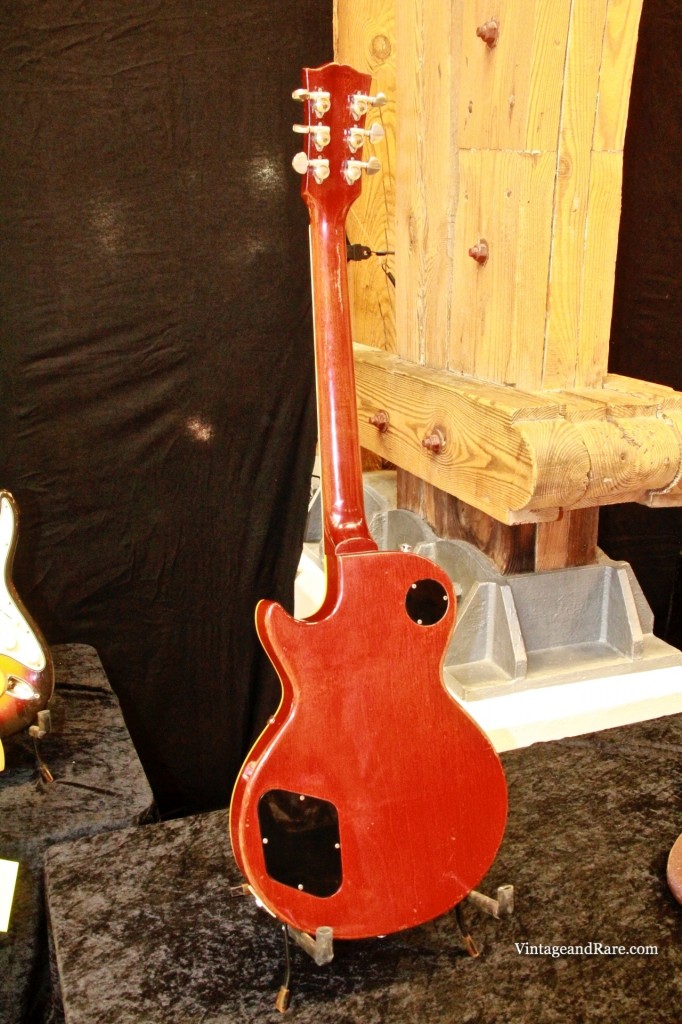 Hi all ….. I hope the crazy world we live in these days is treating you well!!

This particular installment regards a topic that changed mid stream. I started out to write about Les Paul’s and the history behind them but it has been done so well by guys like Robbie Lawrence and Vic DaPra and as I ventured into it I realized where I was going was more of a combination of a personal journey to buy a guitar for myself and after 39 years of buying. selling, collecting and some writing as well as 50 years of playing, diving even deeper into what makes a great guitar “tick!

The story starts by my humbling myself and saying that as a smaller dealer than many this economy has hit me below the belt as hard as anyone . Guys haven’t thought about expensive gear as much since their houses went “south.” BUT … housing is going North again and I am seeing the signs!

So in order to keep the doors open at a few slow moments I too, had to thin out the herd. I had about 14 or 15 guitars. Most of the axes I  sold hurt a little but I usually had a plan. I sold my 56 Strat but I have a 64 for example. I sold 1 of 4 Weissenborns BUT the one guitar that had none similar was my 50s gold top Les Paul that I had to sell. Don’t get me wrong …. no pity parties  here. I still have my 1961 ES335TD Dot Neck … but as I sold off about 4 or 5 guitars I promised myself i’d set aside a little to buy a Les Paul… ok … maybe a reissue or similar. It was  on that quest that my digging went deeper and I wound up finding the perfect scenario for me and a ton of reaffirmation of why we love vintage guitars and/or that quality of manufacturing and materials.

I want to start by saying that the guitar companies of today are really good companies and you get a good bang for the buck and this is by no means a criticism or comparison. They have been subjected to environmental laws like the Lacey act and in many cases it is Apples and Oranges to  compare and not by their hands. But there are  many differences with age and different manufacturing between an old one and a new one  or people wouldn’t be paying 2k for a newer used Les Paul Standard and $350,000.00 for a 1958-60 really flamey standard. That is of course the most inflated and extreme example on the most iconic of guitars. But a 1995 Strat can be had for 9-$1200 usd and guys pay 15-40k for a 50s or 60s pre cbs one. As we all know those numbers are adjusted to the current market. They were 20-75k prior to 2008.

So … as I went looking for a Les Paul I had some time on my hands to find  what exactly was available to me for not too much $Jing (money). I liked some of the reissues I played and I played a lot of them. Also in my range were some 70s possibilities or maybe a late 60s in player condition. But most that I played and saw were newer guitars. There was just an “oomph”  in the body that I was used to with my gold top that I wasn’t finding. That little extra that make an old guitar 110% that we pay exponentially for just wasn’t there for me.

At that point I started researching because it also dawned on me that I know a few builders and one of them is the absolute best restoration place I have had the pleasure of dealing with. Their finish work is outrageous! Because of the nature of building me a Les Paul and also that they are not at all in that business but restoration they shall remain nameless. So as I studied further I found that everything I had been spouting out of theory regarding solid bodies for years was even more true than I knew!

I found out that there is a large sonic difference between Honduras mahogany and other woods (yes .. even other mahogany) being used today. It  wound up being AS significant as Brazilian is to an old acoustic Martin when compared to Indian rosewood!

The same holds true for the finish. Nitrocellulose allows for the wood to breathe better and age too! Much more so than the polyurethane ever could. Hide Glue is a MAJOR factor. The environmental laws today  allow (in the U.S.A.) the use if “titebond” otherwise known as Elmer’s yellow or wood glue but up until recently would no longer permit hide glue (It is being re-introduced and allowed again on some parts of the guitar). The problem is wood glue dries as a plastic  so you now have a layer of plastic between your neck and body, and your Mahogany body and maple top diminishing the sound transference. On a really well made hide glue guitar you get more of that ax working as one entity because all sections are connected as well as possible. You knock on the headstock and the body starts vibrating uncontrollably  …. ok now we’re just getting into guitar porn!

Even something one would think as small as a Brazilian fingerboard can change the sound. The warmth of the board can be discerned.. Now again … these are restrictions put on the new manufacturers and it is not their doing. Think about the sonic difference between a maple and rosewood board Strat! Ok … one form of rosewood to another is possibly not as notable but when you’re evaluating what makes an old iconic machine work so well .. no stone should be left unturned! Slightly warmer tone is one result that the board contributes to.

So … being lucky and patient enough … it took 6 years to convince my friends to build me one. Now I am not suggesting that everyone do this because there really aren’t that many great guys out there and to many, a newer Gibson fills all of their needs. BUT I am suggesting that there is a  large difference to the discerning ear or studio musician and the reasons we buy the old ones are because of the way they sound and play. What I was able to find was that the materials were absolutely critical as well. I personally play player’s pieces as I still work as a musician (which explains why I have always kept a smaller business … split paths). My 64 Strat is a refin … my 61 ES335 that I mentioned is beat to death, but the old wood and time and workmanship taken are irreplaceable to me. I “beat the system” on this Les Paul, but great time and effort went into producing just a handful of guitars achieving results that were the best of both worlds.

So what I wound up with is a guitar that is only a year old but made out of country so it has Honduras Mahogany body and neck/head, Hide Glue which forms to the wood and bonds it, Nitro Finish and a Brazilian Rosewood Board and it honks like a real one! Though I wound up with a new guitar. It was built to old specs and old materials and the result was that body alive as one could hope for and the closest thing I have ever played to an original burst  (’59 Les Paul) and as good or better guitar than the 50s gold top  I parted with.

My point I am making is not that we should all go out and design a guitar to fit old specs. That was my process since I was trying an experiment to see how much the actual woods and workmanship of yesteryear  mattered though it was a pivotal part of why I got a great guitar. My point however IS … there is a reason we buy old guitars and the reasons are many but the result is mostly the same. Like Hugh Hefner always said … “it’s in the wood!”

WE LOVE the way the old ones play and sound. I think the vintage market is on it’s way back and my excitement is renewed.

So …. if you’re a serious player and want to maximize the experience … even if they are “player’s pieces” with strays from originality to save you a ton of Euros …  instead of buying 5 newer guitars to do what one can, try a vintage guitar. It’s easy. Go to your favorite dealer on Vintage and Rare and get your hands on 3 or 50!!!  You’ll be hooked and you’ll be hooked to this site for life because it is now your Mistress!!! You already know WHERE to get them!! https://www.vintageandrare.com/ where you can find my site as Dan Yablonka Guitars aka “Axes Of E-Ville”

Here we have Tom Wittrock. He is showing us Original Vintage Gibson Les Paul 1958 & 1959. Tom Wittrock has owned and operated Third Eye Music since 1976, and is now the most established vintage guitar store in the Springfield, Missouri area. Tom buys, sells and trades all kinds of guitars and related items.

You are looking at two of Toms late 50′s Les Pauls. The first guitar is a 1958 model that Tom had nicknamed ”The other woman”. The second guitar is 1959 model that is nicknamed ”Donna”. He has had both of these guitars for twenty-five years. He brought them to the Arlington Guitar Show because a lot of people almost never get a chance to see these things up close. This way they could look at them closely.

History of the guitars

The Gibson Les Paul 1958 has been through several dealer collectors hands back in 70’s and 80’s when it landed with Tom and he decided that he is the rightful owner and that this guitar is staying with him.

He said that he didn’t know much about the background of the Gibson Les Paul 1959. Apparently some man who was a repairman got it off a customer and sold it for a lot of money and that boosted his business, so he was able to stay in it and do a good job. Then it came into Toms hands.