– A Plethora of classy Plexi-tones with a treble booster 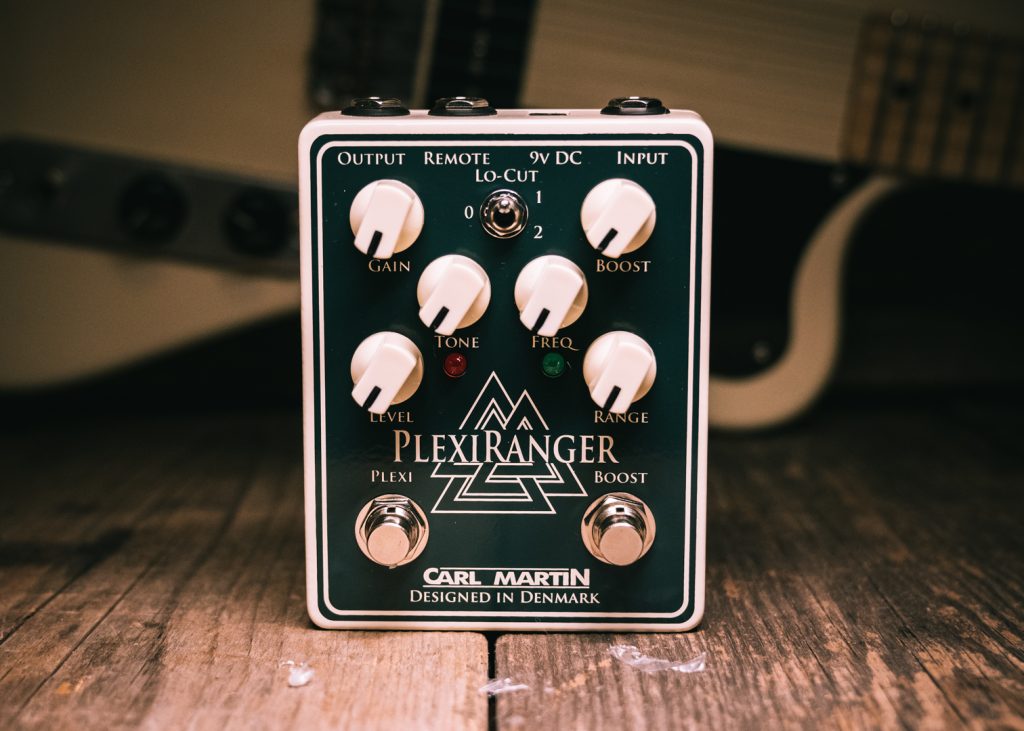 Throughout the years, we have had the pleasure to demo quite a few pedals from the Danish pedal company, Carl Martin.

Their latest addition to the Carl Martin effects line-up is the PlexiRanger.

“I have used the Carl Martin Plexiranger since the prototype stage,” Vintage & Rare’s Henrik says, “and I found it very versatile both soundwise and as an application in a live situation. I’ve used the PlexiTone in most of my rigs the last decade or so, so I’m very familiar with it.”

“I used the Plexiranger as my main drive pedal on the last tour with Mike Tramp and the Band Of Brothers, both as a semi-clean driven crunchy sound, and as the overdriven rhythm and lead tone, using the remote option to switch the boost on/off from the Octaswitch (In my fly rig I use the Boss MS-3 which lets you assign the CTRL switches to make the switch when you change presets).”

“I found that using the frequency and range knobs makes a huge difference when you want to place yourself in the mix. It’s a powerful tool. For example, I might boost the signal with a compressor in front of the PlexiRanger for a particular lead sound, or I could use the PlexiRanger Boost as a ‘tone shaper’ for the more driven rhythm sounds, then when playing lead I just ad the compressor in front and delay and reverb last in the chain.”

Check out Henrik & Nicolai from V&R’s demo of the PlexiRanger.

So what makes this pedal stand-out?

Well, the PlexiRanger is a two-faced pedal.

It houses the renowned PlexiTone – an eerily accurate reproduction of the sound of a raging Marshall hunder-watter – alongside a treble booster section which you can use independently of the PlexiTone circuit.

The history of the treble booster

Treble booster is one of those effects that most players have heard of but relatively few have on their pedalboards. Is it an EQ? Not really. Is it a fuzz? Yeah not so much. A dirty boost? Sort of but not quite. The early treble boosters were developed by companies like Dallas and Skewes as bands got louder and louder, and guitarists started to get lost amongst the low-end clutter.

Treble boosters allowed guitarists to thin out the low end, add some teeth to the high end, and – if they wanted to – to hit the amplifier’s preamp tubes with a hotter signal, driving them to distortion. It helped to carve out a place for the guitar to dominate in a band mix, and it gave players more sustain. It even helped to open up the glorious possibilities of ear-shredding feedback.

In fact, you can hear Jimmy Page talking about treble boosters in the documentary It Might Get Loud, saying; “Knowing that there was a threshold in volume, I wanted to get more sustain out of things. I’d bumped into this chap, Roger Mayer…’did I have any ideas?’ I had this record at home of a guitar that had a lot of sustain on it, and I got him to come down and have a listen to it, and I said, ‘can you get that?’. And he went away and came back with this phenomenal thing.”

Guitarists have used treble boosters to solve all sorts of musical problems. For instance, Tony Iommi’s early Black Sabbath tone was driven by a Dallas Rangemaster treble booster into his Hiwatt amplifiers, slamming the amp’s -preamp tubes and creating the fuzzy, biting, moody, doomy sound that is unmistakably Iommi.

And Jimi Hendrix’s sound guru, Roger Mayer, developed a treble booster combining silicon and germanium transistors in 1961 which was used by many of his local pals such as one Mr. Jimmy Page.

Queen’s Brian May also used treble boosters like the classic Rangemaster to get that heavenly, harmonically excited overdrive tone out of his VOX AC30 amplifiers, while Richie Blackmore plugged his into his Marshalls for his full, expressive Stratocaster tone.

Since those glory days, amplifier design evolved to have more gain and more tone control, so there was less of a need for treble boosters. But as these things tend to go, over time, we started to hear those old tones and ask, ‘Why can’t I get that sound out of my amp?’

And that brings us to the PlexiRanger. Carl Martin looked back at those great guitar tones and how they were achieved, and thought ‘What if..?’ So the PlexiRanger combines a Plexi-voiced overdrive/distortion featuring controls for Gain, Tone, and Level; and a Rangemaster-inspired boost with controls for Boost, Range, and Frequency. There’s a three-position Lo-Cut switch (the settings are slight low-frequency cut, heavy low cut, or no low cut).

The Boost knob gives you up to 15dB of clean boost to drive your amp harder, while the Range control governs how much treble boost is applied. Then that circuit can be fed into the PlexiTone side, giving you Rangemaster-into-Plexi tones right there at your feet. And if you decide to turn off the Plexi side, you’re free to apply the boost’s magic to whatever amplifier you wish to pair it with: as we’ve seen from Iommi, May, Blackmore, and Page, treble boosters can be very amp-dependent, and the one pedal can unlock different sonic treasures from different amps.