We are researching information for a magazine article on the following instrument that was sold at the 4 Amigos 2004 Arlington Guitar Show, maybe you remember who displayed, sold or bought any information or history of instrument will be gladly received with a $1000 Reward, details of instrument are as follows:

If you would like to see more amazing, cool and beautiful vintage guitars, take a look here

END_OF_DOCUMENT_TOKEN_TO_BE_REPLACED

The Fender Custom telecaster is different from the Telecaster Custom in the way the it has other features. 2 different models.

In 1959 Fender came out with a new model – the Fender Custom Telecaster. If featured a double bound body. This year Fender also started to do slab-board fingerboards. Apart from the body binding there is no difference from a standard Telecaster. It´s all about the binding.

Red Bull Tv´s “Gearheads” recently released an interview with guitarist Tom Morello (RATM, Audioslave etc.) where he shares his perspectives around gear and why the gear itself does not matter at all. That debate is very old and we expect to see lots of comments on the perspectives raised by Tom Morello. END_OF_DOCUMENT_TOKEN_TO_BE_REPLACED

We met up with swedish vintage guitar dealer and long time supporter of Vintage & Rare, Anders Anderson, on Fuzz Guitar Show in Gothenburg 2016. On this clip Anders shows up selected pieces from his vintage guitar inventory brought to the show.

END_OF_DOCUMENT_TOKEN_TO_BE_REPLACED

All three are built to exactly the same design, and they all had alder bodies, and Maple necks. They were all fitted with three single coil pickups each, and sported a vintage-style Fender Synchronized tremolo bridge The Buddy Guy had a maple fretboard, the two others had rosewood fretboards.

Which one did I like the most? Not an easy question to answer, since I am four ‘I’s.

Each guitar that comes in, gets plugged into the dry channel of my Roland Jazz Chorus.

It is not the most musical of amps, but it is plain honest. Tube amps are instruments in their own right, that is why I find it difficult to distinguish between the sound of the guitar, and that of the amp. It is like tasting a Frankfurter, wrapped in a bun, embedded in tasty Sauerkraut and with French mustard on top. You can say you had a great hotdog, but you can’t really say much about the Frankfurter inside it, that way, right?

END_OF_DOCUMENT_TOKEN_TO_BE_REPLACED

We had the pleasure of meeting up with luthier, Cristian Mirabella, of Mirabella Guitars from New York in Berlin during Holy Grail Guitar Show 2015. On this video Cristian tells us a little bit about the history around him as a builder and also tells us a bit about one of this unique creations that he brought to the show. Guitarplayer, Ratko Zjaca, was kind to lend his time to demo the guitar.

“Mirabella Guitars and Restorations specializes in the creation of fine stringed instruments, the recreation of exact reproduction vintage pick guards and parts, as well as custom one of a kind parts and inlay work.”

END_OF_DOCUMENT_TOKEN_TO_BE_REPLACED

At Frankfurt Messe 2013 we met up with our good friend and V&R partner Frank Deimel from Deimel Guitarworks based in Berlin, Germany.

On this clip Frank shows us two different versions of the Deimel Firestar model.

How about this once in a lifetime opportunity to get your hands on THREE vintage Gibson Les Paul guitars at once? Only $18.900.

This offer from McDermott Guitars is only valid for seven days so you better act quick. 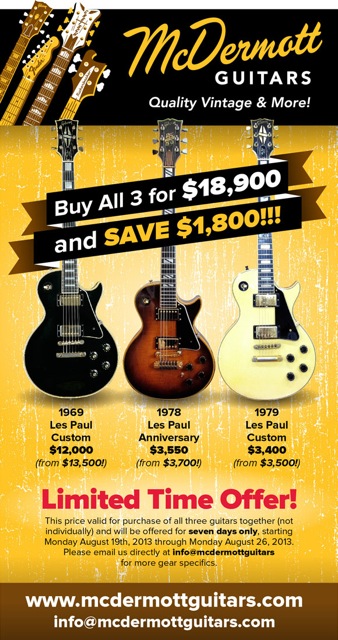 Have you heard of Figment?

It’s an online game where users can create their own, non-existing bands with whole albums with track lists, album covers, and long descriptions of how this band would sound – if it was real! The most creative and interesting bands and albums get the most fans and attention, and are rewarded with ‘lucres’, the Figment game money users can buy stuff with.

Figment decided to give their users a challenge and promised a bucket full of lucres for the winner:

“We’ve noticed that many of our players are musicians in real life.  We’ve also noticed that many of you are great writers, who can easily and concisely write about your love of music, real and fake.  So for our first Figment Challenge we’re looking for one player who owns a vintage instrument and is willing to write about why they love that instrument, and how playing it has inspired the bands they create on Figment.”

The winner of the challenge is formerwageslave aka Remy Brecht.  He owns this 1971 Gibson SG:

Here is the article he won the challenge with:

’71 Gibson SG Inspires Both Online and Off
by Remy Brecht

I am the proud owner of a Gibson SG 200/250 from around ’71-’72. I bought it for $180 down in Memphis, TN from a FedEx employee sometime in the late 90′s, though I wish I had thought to ask him more about the instrument’s history at the time. He either didn’t realize what he had or didn’t fully appreciate its well-worn appearance, and had it “restored” at some point in the form of drowning it in a thick coat of shiny white paint. Nevertheless, it still has its rubber knobs and plastic switches, its “Les Paul Custom” tag on the headstock, its single coil pickups hidden by black plastic covers with “Gibson” in raised cursive lettering. The latter is perhaps my favorite detail about the guitar. Since then, this SG has been my main axe through countless projects and cities, from alternative rock cover bands in Memphis to industrial rock in Indiana, from feedback noise experiments in Las Vegas to digital hardcore punk in Detroit. My blood has soaked into the fretboard on numerous occasions, and there are plenty of new dents in its weathered but still rock-solid body.

Sadly, however, I don’t always have time to sit down and record ideas for songs… or entirely new bands, for that matter. When I discovered Figment ( http://www.figment.cc ), the immersive online game dedicated to creating painstakingly realistic fake bands, I knew I had found the perfect outlet for my excess creativity. On Figment, users can create the bands of their dreams, writing their back stories and member bios, designing their logos, and creating albums complete with cover art, track lists, credits, and descriptions. Other Figment users then “buy” and “listen” to these non-existent albums to increase their position on the Hot Albums chart. There are also frequent challenges with real prizes and famous music industry judges, including concept album and album cover design contests.

One of my main bands on Figment is the mythical stoner/doom group Vorpal Queen. My vintage SG is a constant source of inspiration when coming up with songs and albums for VQ, especially since one of their main influences is Black Sabbath. Tony Iommi has his own line of SGs that bear his name, and owning an instrument from that same family of guitars (and one that dates back to the days of such classic Sabbath records as Paranoid and Masters of Reality!) helps me channel those heady, haze-filled days of nascent heavy metal. Considering the SG’s narrow neck with strings set hand-crampingly close together, the heavy chunk of maple that is its body, I have a deeper appreciation for players such as Iommi who were able to play them back then with such speed and finesse– not an easy task compared to the lighter, faster guitars available today. The SG’s weight, the way each note rings through the entire body… these things stick in my mind when imagining new chapters of dark sludge for The Queen!

Figment bands of mine:

Those of you that love guitars and the history of guitars, may also feel an affinity with vinyl records. Here is a little piece about the cross-over between the two worlds, and the appearance of iconic guitars on vinyl record cover art

Sometimes the album cover is just as (or more) interesting and fascinating as the album itself. Great cover art catches the eye and makes any record stand out from the rest. Cover art also provides clues as to the band or artists’ intent – will this be an upbeat or melancholy collection of songs? Or will it be a journey through various musical stylings that will evoke a multitude of emotions and feelings? You can also determine the time period by looking at clothing, famous architecture, and icons (peace signs and smoke rings should be a dead giveaway) featured on the cover.

What Do Guitars in Cover Art Mean?
For many musicians, musical instruments are much more than just a medium on which to play – these instruments are an extension of the soul, spirit, and body. Featuring an instrument on the cover usually means more than, ‘Hey, you’re going to hear a lot of guitar work on this album.’ Usually portrait shots (Johnny Cash or John Lee Hooker holding their guitars) or abstract images of guitars floating in mid-air (Dire Straits Brother in Arms), the guitars featured can provide some clues as to the main theme of an album.

For example, Brother in Arms, features a steel blue National Style 0 Resonator, manufactured between 1930 and 1941. This guitar relied decorative steel sheets (also called cones) to help it produce a louder and more distinctive sound than traditional acoustic guitars. The design helped keep the instrument from being overshadowed by other instruments like the drums and horns.

Interestingly, the album features several songs including Brothers in Arms, and Ride Across the River that explore the nature or war and military life. The guitar on the cover was probably designed during WWII and, while beautiful, appears to have been pieced together with various metals (may cause some people to think of Mad Max Beyond Thunderdome – a post apocalyptic movie about people surviving war and rebuilding a society – the movie came out in 1985, the same year as Brothers in Arms).

Musicians Known for Their Guitars

Other famous musicians such as Eric Clapton, Santana, Hank Williams, and B.B. King, who named his original guitar and all those that came afterwards ‘Lucille,’ are known for their expert guitar work. King even wrote a song about his guitar, several of which have been featured on album covers.

This may be why Eric Clapton is seen holding a guitar on many album covers – Slowhand , Just One Night and 24 Nights just to name a few. The cover art for 24 Nights, a live album Clapton released in 1991, was done by Sir Peter Blake, who also designed the cover art for The Beatles Sgt. Peppers Lonely Hearts Club Band. The cover, a squiggly, free-hand drawn sketch of Clapton playing his guitar, is appropriate for the album because, according to Clapton, the album was not an easy one to produce. The album chronicles Clapton’s impressive 24 nights of performances at London’s Royal Albert Hall.

This piece was written by Sylvia from www.vinylstall.com

If you are looking for vinyl records on the internet, then please pay us a visit